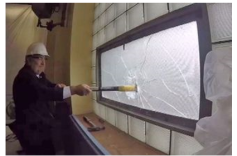 A broken window in a community center isn’t usually a cause for celebration.

But at the Easton Area Community Center, it signaled the start of significant renovations and a new vision for area youths.

The window wasn’t broken by an errant ball. It was broken Monday by sledgehammer-wielding Easton Mayor Sal Panto Jr. He told a small gathering of supporters Monday he was a student at St. Anthony’s School across the street when the original windows went in.

Now the 25 windows in the center at 901 Washington St. in Easton will come out and be replaced by modern, more energy efficient ones.

The original windows are translucent. They allow some light to enter but prevent anyone from seeing through them. The new ones are clear so children can see through them to the outside world, according to board president Maurice S. Luker III. 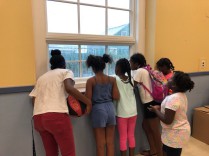 Children look out one of the new windows that went in at the Easton Area Community Center, 901 Washington St., Easton.

“Symbolically our children will have a new vision on the world and that’s what we try to give them: a new understanding, a new hope and a new pathway for success in our community,” Luker said Monday, Sept. 30.

Luker said the city funded half of the project. The rest was paid by the Greater Easton Development Partnership, Lafayette College and an anonymous donor, he said.

The center opened in 1953 and remains in serviceable condition, Luker said. The new windows will help keep heat in and cold air out. The windows along with new LED lights in the wrestling room will help keep energy bills down.

Most of the windows were installed prior to Monday’s ceremony. The rest should be completed by the end of the month, according to board Vice President Tony Corallo. They’re being installed by Ramos Construction.

The community center’s annual fundraising campaign will be called “Open a New Window” in honor of the project. Donations to the fund support programming for children and senior citizens at the center.

For more information, use our contact form or download our registration form directly. We look forward to hearing from you!